Justice40 and Community Definition: How Much of the U.S. Population Is Living in a “Disadvantaged Community”? 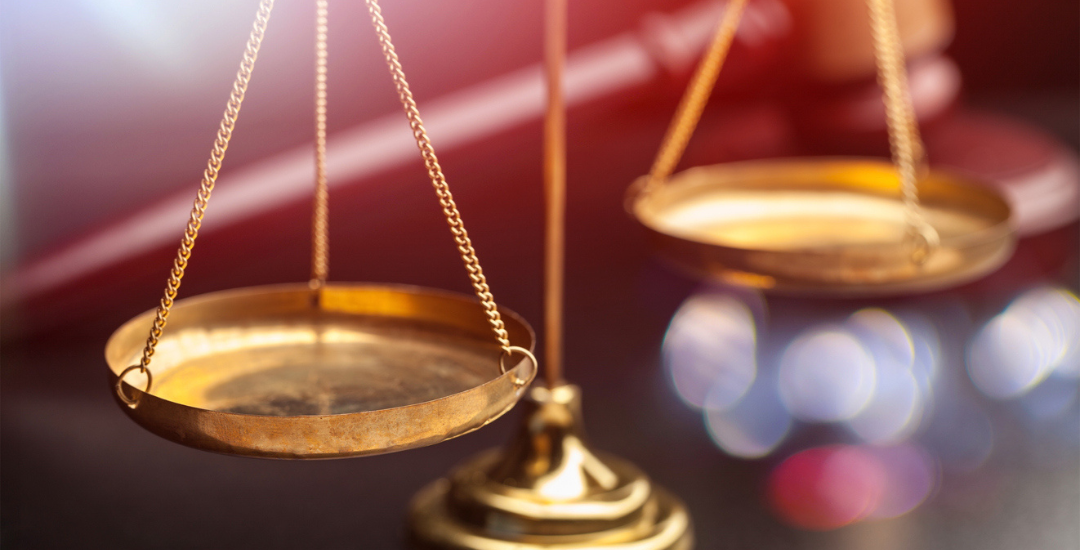 The first federal attempt at compiling a list of communities that experience environmental injustice was made on June 4th, 1992 by Representative John Lewis and Senator Al Gore. This bill, titled the Environmental Justice Act (H.R.5326), referred to the communities in question as “environmental high impact areas.” Environmental high impact areas were defined as the 100 counties in the United States that had the highest total of toxic chemicals, by weight, in the most recent five-year period. For six weeks, the bill was passed around between nine different House Congressional committees, never making it out of committee to a full vote. The bill was reintroduced five times by Representative Lewis before he passed on in 2020. Thirty years later, there has been no successful Congressional action to define environmental justice (EJ) communities and allocate funding to improve environmental and human health in these communities.

Now, the Biden-Harris Administration’s Justice40 Initiative has reopened the question of how to best prioritize EJ communities at the federal level. The Justice40 Initiative promises to pass at least 40 percent of the benefits from federal investments in climate and clean energy to disadvantaged communities. In order to deliver on this promise, the federal government needs to develop explicit definitions of what “benefits” are, and which communities are considered “disadvantaged.”

The federal rollout of this initiative has been rocky, fraught with delays in promised materials, resignations, and states leapfrogging ahead of the federal government in implementation. But the Justice40 Initiative seems to be on the road to a just, equitable implementation by allocating 40 percent of clean energy funding to communities that make up less than 40 percent of the U.S. population. This approach delivers on a core tenet of environmental justice: recognizing that many communities have been disproportionately burdened by pollution in the past, and making material reparations to those communities.

The White House Council on Environmental Quality (CEQ) finally released a beta version of a Climate and Economic Justice Screening Tool (CEJST) earlier this year, as well as a draft definition of disadvantaged communities based on socioeconomic, environmental, health, climate, energy, and infrastructure indicators. The number of communities identified as disadvantaged communities according to this draft methodology totals around 30 percent of the U.S. population. This means that at the federal level, the Justice40 Initiative is prioritizing investments, equitably rather than equally, in EJ communities. In other words, the federal government is exceeding parity in their funding per capita (40 percent of funding for 30 percent of the population), focusing resources in communities that have a history of environmental injustice.

Many environmental justice advocates have been responding to the Biden Administration’s Justice40 Initiative actions by focusing on “who’s in and who’s out” based on how EJ communities are defined. This approach is necessary, but we hope to offer a few other ideas for consideration when evaluating federal and state Justice40 efforts.

There is an inherent tension between precision and urgency in public policy decisions that allocate resources to specific communities. On one hand, it is important that the resources being allocated are targeted to the right communities. If “disadvantaged communities” are defined vaguely or inaccurately, an unjust allocation of resources would result. The precision of these definitions is important, and gathering accurate data at a high partial resolution is a worthy endeavor. However, the data gathering and community definition process can overshadow the need to codify such definitions in regulation so that the resource reallocation can begin. For decades, the environmental justice movement has been siloed into commissions and advisory boards, asked for their recommendations for improving environmental justice, then ignored when it comes to material investments in disadvantaged communities. While the initial methodology for identifying disadvantaged communities is important, these definitions can be amended, especially when a government agency is given authority to update and amend definitions as needed.

In addition to this balancing act, there is the question of what resources are being reallocated. This question is not separate from the community definition question, but interwoven. If the resources being allocated are, for example, funding for health clinics, hospitals, and healthcare workforce development, then the communities that should logically be prioritized for such funding would be communities that have experienced disproportionate environmental health effects from pollution, both in the past and in the present. These EJ communities are also likely to be communities of color and low-income communities, and are therefore more likely to have higher energy burdens compared to the general population. Therefore, resource allocation of renewable energy benefits should be prioritized to these communities as well. What benefits are being allocated and which communities are receiving benefits are mutually constitutive questions.

These questions are wide-ranging and worthy of further study. Here, however, we focus on a specific question: how much of the general population is living in a disadvantaged community? And is that number proportional to the benefits being targeted to those communities? We conducted a review of the states that have developed definitions of EJ communities, and compared the results. (Note, while states have different ways of referring to these communities, we use the term EJ communities to refer to any policy definition developed to prioritize communities that have been historically disproportionately burdened by pollution.) The table below provides an overview of state approaches to defining EJ communities, including the types of indicators used in the definition, and approximately how much of the state’s population is defined as an EJ community. 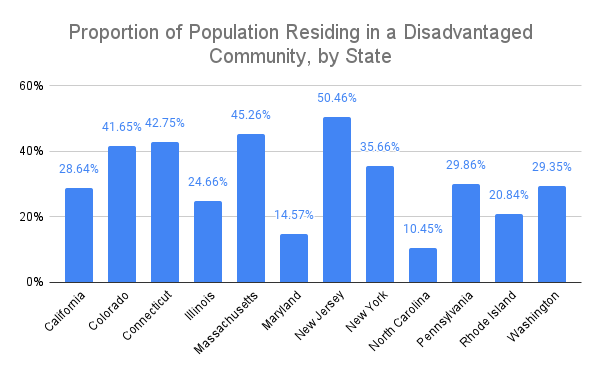 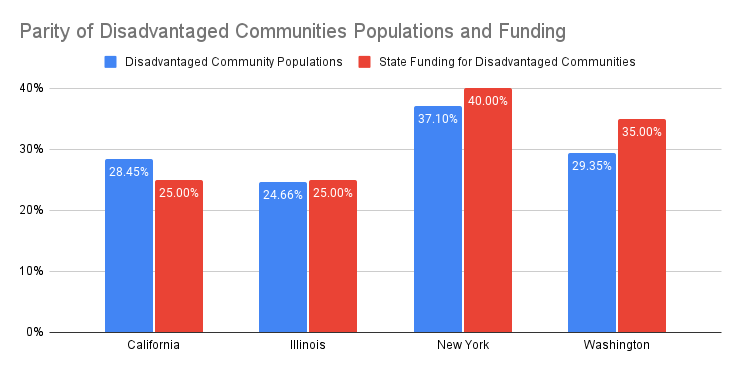 There is a wide range of how much of the population is considered to live in an EJ community (ranging from 10.45% in North Carolina to 50.42% in New Jersey); however, in states where there is funding statutorily allocated to EJ communities, the percent of the population living in an EJ community is roughly equivalent to the percent of funding they are entitled to. In addition, these states have generally decided how much funding will be allocated to these communities in legislation, then passed on responsibility for defining disadvantaged communities to state agencies (with public participation and feedback requirements). This process has seemingly resulted in fairly close mirroring of EJ community population percentages and state funding percentages – it will be interesting to see whether this trend continues in future state legislation. This raises the question: are state-level Justice40 efforts equitable and just? Or are they simply bringing disadvantaged communities up to a baseline equality with their more resourced neighbors?